Here is a photo of the first idea of the banana bongo’s.

Orlando And I had found out that the person with the alligator clip can work the bongos but the other person can’t. So what we figgerd out was that, say if Orlando has the alligator clip and I hold his hand it creates a circuit and I can now control the banana bongos drum’s to like Orlando. We learn’t circuit in sewing mask’s if  it wasn’t for that we would know nothing.

Here is a snip of the things you would need to do Makey Makey.

1: Alligator Clips. Alligator are used for to link up all the wires, board’s and so on. They create a thing called a circuit that link’s up the two thing’s. (Like the Banana Bongo’s)

2: Sticker’s. As we all know stickers are just used to customise things and make it cooler but in this project Orlando and I sadly didn’t get to use them. 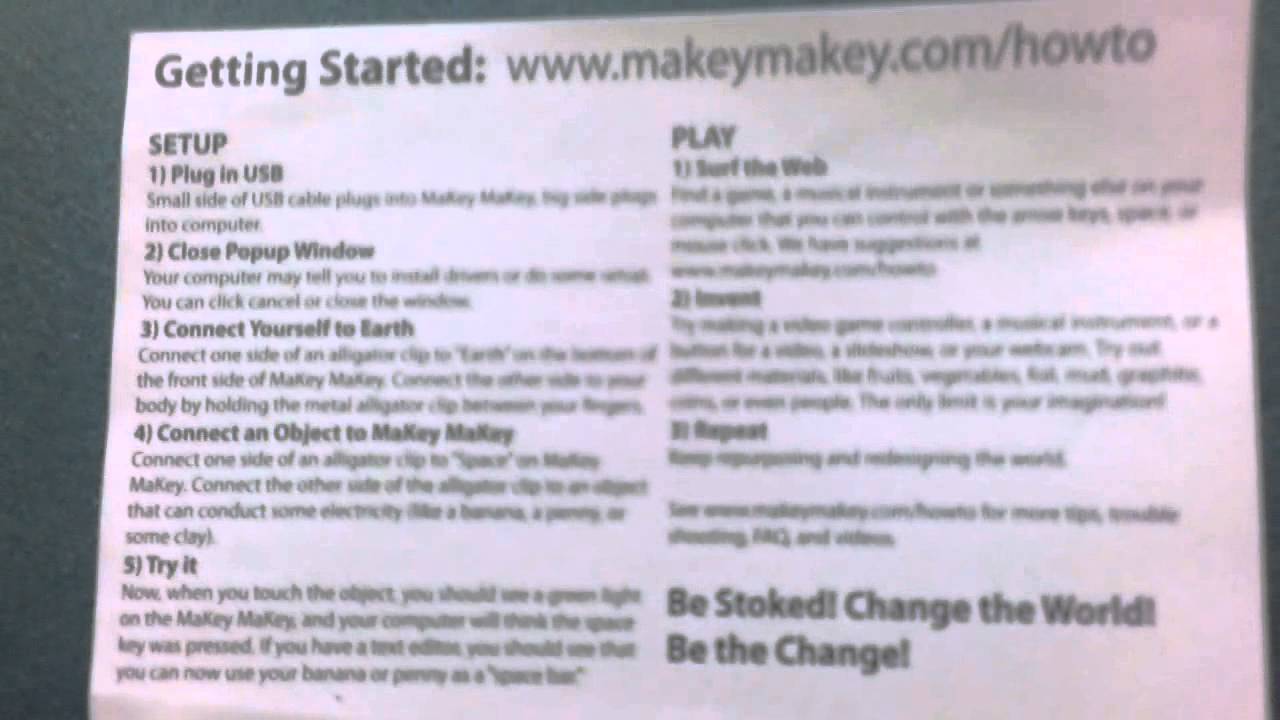 It’s a bit blury but it will have to do.

4: Connection wires. Kind of the same as the alligator clips but just a tiny bit smaller and it also doesn’t have a clip on the end.

5: Back of Board. The back of the board has all different things you can do but I didn’t really get to learn much about that.

6: The front Board. The front of the board is the mane part it is the thing that controls the circuit to manipulate the wires together.

7: The USB cord. This cord just plug into the laptop so you can program your work to the Makey Makey.

In Bloxels my group was Alex Orlando and I. Alex and I had made an r2-d2 character for Bloxels here is the times laps.

Anyway there is a thing called the Bloxels Board were you make something and face the camera on it and it will sense that and I will manipulate to the game here is a photo.

I loved working with Bloxels and can’t wait to work with them again.

bits.The Lego Boost is my own and I wanted to use it more so I chose to use it in the project. In this project we have made it so when the Lego Boost runs up with a bomb and hits a catapult with the ball on it. And when it hits the ball, the ball will score against a moving goalkeeper. (Which is made by Lego We Do 1) But the goals were made by us. Anyway so when it scores the goal lights go flashing and there is a score board saying 1 which is representing the number of goals. Then the lifter lifts up and pulls a trigger that shoot’s a bullet that hits a target, and them the Lego Boost goes back off the field and dances. Then the EV3 comes and takes the catapult away off the pitch and that’s done for the project. I’ll show you a photo of the Lego Boost.

The Little guy is the on the Lego Boost is the driver just for decoration. This Video that I’m about to show you is just what the Lego Boost does but it’s not the whole project. By the way the catapult is supposed to have a ball in it and score a goal. Here is a video.

That’s what the Lego Boost does.

In Little Bits we had made a score board that says what the scores were. Here is a picture.

It wasn’t on at the time that’s why it is not showing the score.

Lego We Do Goal Keeper

In through out from what I have learn’t from Lego We Do and how in the past we made a Lego We Do Goal Keeper. We have made the exact same thing as last time but we extended the goals way bigger so that the Lego Boost can actually score a goal ( Don’t tell anyone). Here is a picture Of the Goal Keeper.

That’s what our Goalkeeper looks like at the moment

Luka Orlando and I had programmed the EV3 to be a  sweeping  that comes on the field and takes and the EV3 has an attachment to the side so it drags the catapult off the field like a tailor on the back of the Car. At the moment the EV3 has been doing it’s job at the moment but we just can’t get the attachments to drop at the right time. The program comes from the Lego We Do app that’s on my laptop. We have to be so precise.

That’s a diagram copy of what the EV3 robot.

Here is a video of what the EV3 does.

What we have done at the moment (New Soccer Field)

On Tuesday Luka went to division in athletics so it was just me and Orlando. Orlando and I had remembered that we had ordered a 90×60 3 mm wooden board. Then Mr Mckie had asked Orlando and I to go for a walk with him and our wood board had arrived. It was really plain and we saw Hayder spray caning his pinball machine. I really wanted to spice things up a bit and we had decided to spray canned our field green (of course). Here is a picture of it.

There is only half of the line because I had sprayed way to much and it had smudged so then Hayder helped us and had over lined the smudged with green so it’s not visible. We are still waiting for it to dry so we can do it again were going to do it on Friday I think.

Today we had done a different thing then planned. We had made it so much different we had painted the board all white and then we had waited for it to dry then we had put masking tape on top so then we can paint it green on top and we can just peal the tape off and it will be a white line. Yay!!! Here Is a photo of it at the moment.

Which ideas are important?

Lego Boost because it the main thing that triggers everything to make it work like for eg: The catapult and the shooting range accessory test shot.

What will happen if…?

What else do I need to do?

Like I said just before about that we are waiting for the paint to dry then when it dried today we had placed the masking tape on top. Then on our last 2 hours of design for the term we will spray paint it green. The reason why we waited because today it was boiling and it was pretty dangerous. Then after the green spray paint goes on we will peal the tape off carefully and when pealed off it will hopefully be perfect straight lines.

How could I do better?

At the start of the project we tough the field looked really sloppy look of it. So we wanted to make it have good appearances and be neat. So that’s when we had asked Mister Mckie to order us a 90 by 60 and 3 mm.

Did I solve the problem?

Yes we did because we had stuffed up and accidentally smudged the paint but then we fixed our problems and get the job done.

Am I working well with others?

Yes I am a lot and it’s nice to be with someone who isn’t in my mentors class and get to know everyone better and mainly get to know then in general.

Is my plan detailed enough to achieve my goal?

Yes I really think we have done a lot of work and effort put into this amazing project.

What am I going to do next?

No to sore yet haven’t thought that far yet. I’ve just been so focused on our big project.

On Tuesday we had coated the board green and had pealed the tape of the field and it was perfect straight clean white.

Here is our finished photo.