I’ve achieved a bit, I have gone down to the junior school to say I will have a footy clinic soon and I have sent a lot of emails to Mr Schuyler to organize the clinic. I have had to make myself check my emails a lot more so that has up skilled me a bit because now I’m more organized. I have been really busy sending emails so that was hard and I was meant to do the clinic in week 6 but I have to do it in week 7 now because of the junior schools schedule. the next thing I have to do is film the clinic then edit.

this term I intend to make a video of me running a footy clinic for the preps year 1’s 2’s and 3’s. this will have little pointers on how to play footy and how to kick, just the basics but its mainly just filming the kids having fun playing footy and me teaching them a bit about footy. I think I will just use a HFG with a shot gun mic if it is a little bit windy  if it is very windy I will use lapel mics and a HFG camera and if it is a good day I will use a zoom camera. because I’m working with younger kids I will use less sophisticated language so it is probably aimed for preps to 3’s. I’m most looking forward to just having fun with the kids and making them better footy players. 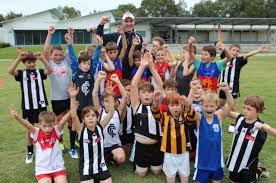 What do you intend to create? What technologies are you planning to use / learn about? Who is your project targeted at? What are you looking forward to?

Birke had a lot of messages in his TED talk one was that kids can make a difference by getting their family and cousins to buy local and organic. another message was that farmers mix DNA for growing purposes and they use dangerous chemicals to make their soil better. another message was that company’s make their products from those chemical filled plants that are not healthy and not good for the environment. Birke had lots of powerful stats one was that you could pay the farmer or the hospital. he said this because he was talking about the chemicals some farmers put in their and he was saying that some people think that local farmers charge more and that’s when he said you can pay the farmer or the hospital. this is powerful because it is confronting. another one was that he used to want to be a NFL footballer but now he wants to be a organic farmer. this is powerful because he is basically saying he is willing to make a living out of doing the right thing. the last powerful comment was that there is a farmer that is deemed crazy because he dose not use the chemicals that everyone else uses. this is powerful because this man is doing the right thing and people are saying his crazy.

The main message was that no animal deserves to die. That means that there is no point to killing animals when you can just make something and save time and animals.

Richard got his message across very well. He weaved his message into a story. This is effective because it makes the audience feel emotion. Also he used lots of pictures to entertain and to help explain his story.

Richard used a bit of technical support like the usual head set to project his voice to the audience. He also used a clicker to change the pictures behind him these helped because they backed up what he was saying.

Richard used a couple of presentation techniques, like putting humour into the suitable bits but he did not put to much in because it was a serious topic. He also put a timeline in so he sort of took the audience on a journey and made them feel emotion.

In Thomas’ talk the message was clear, the main message I took away was that kids are capable to make games and be successful in the technology world and to get people involved. he made this clear by not steering away from this message and even using some humour. he got his message across very well he talked with emotion to intrigue the audience. to make his presentation the best it could be he used a bit of technology like a head set to get his voice over to the back of the room. the used a clicker to get images on the screen and he used his I pad with his lines on it to refer to if he got stuck. he used some great presentation techniques to engage the audience, he used humour to make the audience listen to every word, he went over relatable topics so the audience could relate to what he was saying and he used great emotion in his words and used hand gestures to entertain the audience.